Flattening the curve: are lockdowns effective?

Flattening the curve: are lockdowns effective?

On Friday, March 27, with coronavirus cases tipping the 1000 mark and the first death reported, the country went into lockdown. It was announced four days prior, and nearly 60 million South Africans prepared for the 21 days of mandatory quarantine to help curb the spread of the virus.

The collective aim of affected countries is to ‘flatten the curve’. This term is used to describe the attempt to slow the rate of infection, so that a spike representing an increasing number of infections on a graph improves into a gentle slope, and then ideally flattens over time. A sharp rise on the ‘curve’ represents a fast rate of the disease spreading. Large amounts of people are infected simultaneously, and it puts pressure on the health system. A gentler curve represents a slower rate of infection, which means there aren’t as many people getting all at once, and it is happening over an extended period of time. The health system might able to deal with this situation better, and provide adequate care for everyone. A lockdown approach is believed to lessen the risk of infection, and smooth out the slope.

“World Health Organisation continues to call on all countries to implement a comprehensive approach, with the aim of slowing down transmission and flattening the curve,” said Director-General Dr Tedros Adhanom Ghebreyesus. “This approach is saving lives and buying time for the development of vaccines and treatments.”

One by one, countries have gone into lockdown over the past few weeks. Italy, deemed the new epicentre of the virus with the highest death toll in the world (over 10 000), has been in lockdown since March 9, but there is no strong evidence that the rate of infection is slowing down yet. On the other hand China, where the virus originated, is on the other side of their lockdown — and it was seemingly a success.

China locked down the city of Wuhan on January 23, with 830 reported cases. The rest of the country followed suit later that week. The numbers, however, got progressively worse. The country had 63,851 cases by February 13, with 5,090 new cases reported that day— more than on any previous day. Then, something switched. On February 14, 2,641 new cases were reported. And it just kept declining everyday onwards. Today, China reports no new local transmission cases.

South Africans will inevitably look for positive results of the lockdown in the next week or two. But as we saw with China’s haul to recovery, and Italy’s ongoing struggles, we should not expect a quick fix.

Firstly, the virus can have an asymptomatic window lasting between two and 14 days. It may then take even longer for an individual to get tested, due to uncertainty over symptoms or not being able to get tested immediately. Thus, positive tests that are reported in the next few weeks are likely to have been infections from before the lockdown began. Additionally, once an individual is tested, results may take a few days to come back, especially as tests are in high demand at the moment. It might then take another few days for those positive results to be reported in government statistics.

South Africa’s recovery might follow the same pattern as China – increasing, peaking, and then declining – but there are factors that might lead to a different outcome. While South Africa has taken very strict measures, China were even more extreme in their approach, with reports of measures like separating symptomatic people from their families. The ability of the government to crack down and ensure that everybody is adhering to the rules of quarantine will be important, as Italy has shown a lack of discipline earlier on in their lockdown has led to catastrophic consequences.

China also has greater financial resources. Their ability to build hospitals overnight and enforce aggressive testing is not something we can replicate. The virus has already had a major impact on the economy. On Friday, Moody’s downgraded South Africa’s sovereign credit rating to “junk” status. With the country already in recession, the virus has added insult to injury.

Every industry has taken a hit. Many people have faced salary cuts and retrenchments. With so many living from one pay cheque to the next, having to survive in a mandatory lockdown for at least three weeks with no income is devastating. South Africans are making sacrifices for this approach, some far greater than others, and they all hope that it will be worth it in the end. 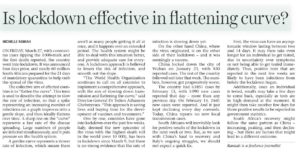