Learning from other nations’ pandemic measures

Learning from other nations’ pandemic measures

In the desperate battle against the Covid-19 pandemic, which has gained a footing in major cities across the country, one eye must be focused beyond our borders for lifesaving lessons.

The victories of other states against the global pandemic, and likewise their failures, provide instructive examples for how South Africa should combat the deadly pathogen.
This macro outlook has already paid dividends.

When the virus began its march across European borders and onward to the Western world, President Cyril Ramaphosa and his cabinet took decisive action, imposing, and then extending, a national lockdown which appears to have flattened the infection curve within our borders.

With millions of South Africans staying away from work, a mass testing and screening initiative, which saw as many as 60 000 health workers hitting the streets, was able to slow the rise of new infections. This provided a critical buffer for the country’s hospital networks to deal with the rapidly spreading infections, while gearing up for an expected peak in case loads come July.

Once infections are slowed to a manageable level, the lockdown restrictions will be eased delicately with a view of safeguarding hospitals from being overwhelmed. We had the benefit of watching the fall of Italy as the virus bounced from vector to vector, to date claiming more than 35 000 lives.

Hospitals and clinics in the country’s northern region were swamped. Olympic ice rinks were converted into mortuaries because there were simply too many bodies to deal with.
The virus had stolen a march on the Italians, running rough-shod through communities — the state slow to react in a theatre which saw them hardest hit in Europe.

That was a grim lesson to learn. And now, as former European Union nations begin the trickle-opening of trade and business, we have lessons to learn again.
In Germany, small retail spaces, including bookshops, cycling stores and even car dealerships, have been allowed to reopen.

In neighbouring Poland, parks and reserves have been opened. Public markets in the Czech Republic are now open to trade again and in Norway, children are returning to school.

In Donald Trump’s United States, ever au contraire, the president has bullishly moved to reopen societies while the virus is still in the midst of its tear across state lines to become the new global epicentre. The world saw images of a paradoxical protest in San Diego, where American citizens dead set on returning to work and life as they knew it, found themselves facing medical staff in scrubs blocking their path, a metaphor for the deadly trade-off.

For South Africa, this is the acid test that we need to observe closely, and these observations will save lives. We have, since the beginning of May, begun the gradual easing of the nationwide lockdown with certain industries now able to resume operations.

With the Covid-19 alert level at stage four, Ramaphosa said in his weekly news letter that government’s goal now is to reduce steadily the alert level by keeping the rate of infection down and  further preparing our health system for the inevitable increase in cases. But, by taking into consideration lessons learned from the rest of the world, it is evident that our lives will never be
the same, no matter the stage of lockdown we find ourselves in.

“While there is still much about the pandemic that is unknown, experts now agree that virus will remain a threat to global public health for some time. We must therefore be prepared to continue
to live with the coronavirus among us for a year or even more,” Ramaphosa wrote.

He warned that after the lockdown, we will still need to observe social distancing, wear face masks, wash our hands regularly, and avoid contact with other people. Workplaces, schools and public
areas will need to be re-organised. We will have to find new ways to worship, socialise, exercise and go about our daily lives. Easing the lockdown too soon or too abruptly would risk a massive resurgence, decimating strides made against the pandemic with our timeous shutdown measures and the massive medical response.

Countries like Germany and China have seen a resurgence in new infections after they relaxed certain restrictions. We have had time to prepare our health system for what is yet to come.

But as citizens, we cannot forget that while the lockdown eases, our responsibility in preventing the spread of the virus doubles. For now, we walk the tightrope, and to quote Ramaphosa himself, we dare not fail. 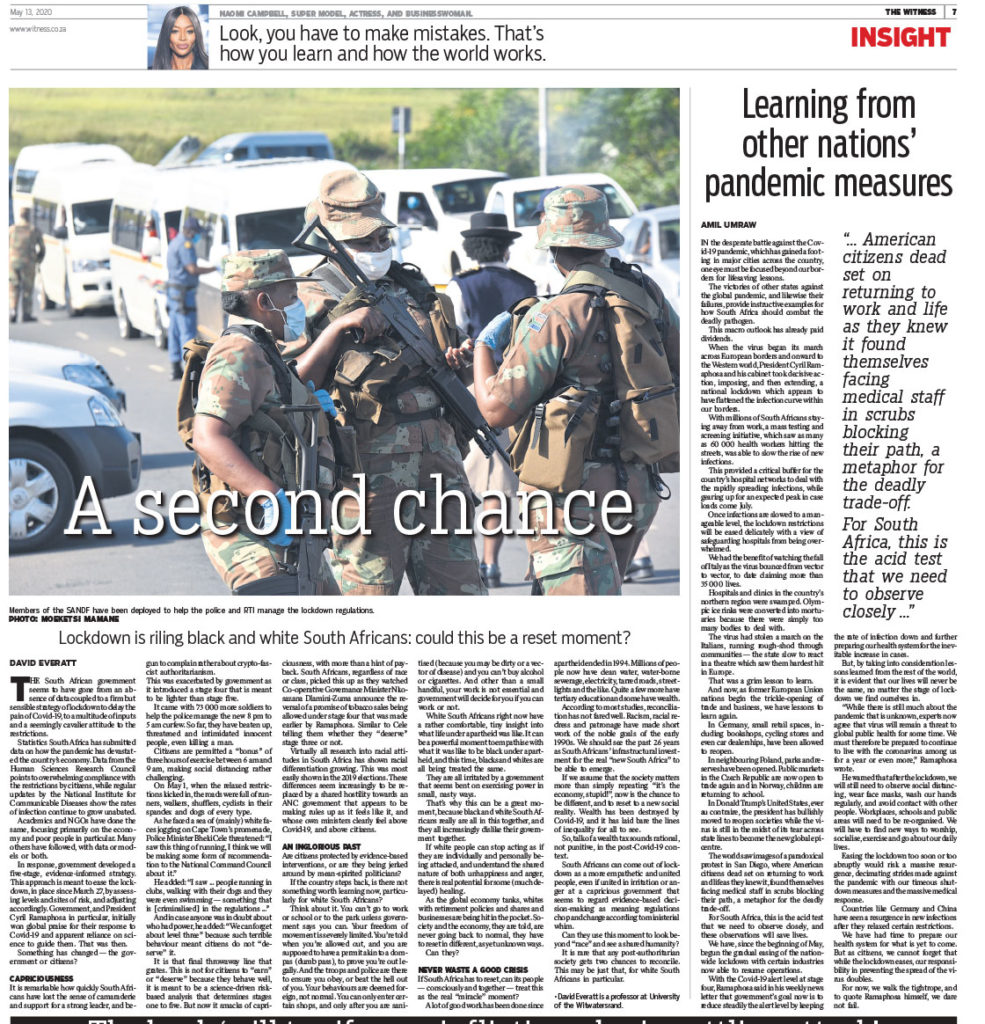