FOR one professor who has dedicated his life to fighting public health outbreaks, the rise of the Covid-19 pandemic in South Africa has drawn painful parallels to the spread of HIV and Aids.

Professor Khangelani Zuma, the divisional executive for human and social capabilities at the Human Sciences Research Council (HSRC), has, in the midst of the Covid-19 epidemic, shifted the majority of his efforts to assisting government to conduct some of the research that guides the country’s response to the virus.

Before Covid-19 swept the globe, Zuma was on the front line of HIV/Aids research in South Africa, with more than 20 years in the field.

A biostatistician by trade, Zuma developed his interest in mathematics while growing up in the rural village of Impendle in KwaZulu-Natal. The son of a shop owner, Zuma said his parents had a “limited level of education” and counting the coins from his father’s shop drove him to a career in mathematics.

It was this drive that also pushed Zuma through a bachelor of sciences degree in mathematics, geography and statistics, and onto obtaining a highly sought-after scholarship at a top university in Belgium.

In an interview, Zuma said his two-year stint in Belgium from 1997, to do a master’s degree in biostatistics, was an experience of many firsts for him. “It was the first time I had left the country, the first time for getting on a plane, my first time for everything. Coming from South Africa, I had never used a computer. When I got there, I had no clue how a computer worked,” he said.

Upon his return, and after a short time at the Medical Research Council under research giants Carl Lombard and Salim Abdool Karim, Zuma went on to complete his PhD in New Zealand, before returning to South Africa to work at the HSRC in 2003.

Since then, he has driven efforts to navigate South Africa’s HIV/Aids crisis.

“It was very stressful when we work with HIV research. I was trained as a mathematician, it’s about numbers. But once you start working with public health research and you see the face of a disease, you realise you are not only dealing with numbers, but with human beings,” he said.

“We were trying to understand this epidemic that was killing people. So what is happening now with Covid-19 brings back those images from that time. The situation is, in a way, exactly the same in a sense that we had a disease people were dying from, we could not see the disease and there was no cure for it. The least we could do was research and understand this disease, but the longer it took to come up with solutions or suggestions, the more people were dying.

“I remember in 1999, one of my best friends was terribly ill and he was dying and there was nothing we could do. We were in it. That in a way gave you strength to say, ‘if I do nothing, I’ll lose more of my friends’,” Zuma said.

“Even if you look at how we react now, if we had reacted the same way with HIV as we have with Covid-19, we would not have come to this point with HIV and Aids.”

Zuma says it is unfortunate that people have to die in order for lessons to be learnt in a public health system.

“It is disastrous that we have to have diseases for us to learn and people must die for us to learn. This one [Covid-19] is even worse than HIV. With Covid-19, it is about by me being with you, I run the risk of being infected,” Zuma said.

They’ve studied how much South Africans actually know about the virus, its transmission and its symptoms.

They’ve analysed whether citizens are actually abiding by the national lockdown rules, and the social and economic effects that it has brought. Health-care workers and support staff have also been interviewed to determine their challenges and preparedness in dealing with Covid-19. And a study assessing the impact of Covid-19 on the youth is in the pipeline.

Through their research, Zuma and his team have helped guide government through parts of its response to Covid-19 and will continue to do so as authorities find new ways to prevent the spread of the virus. 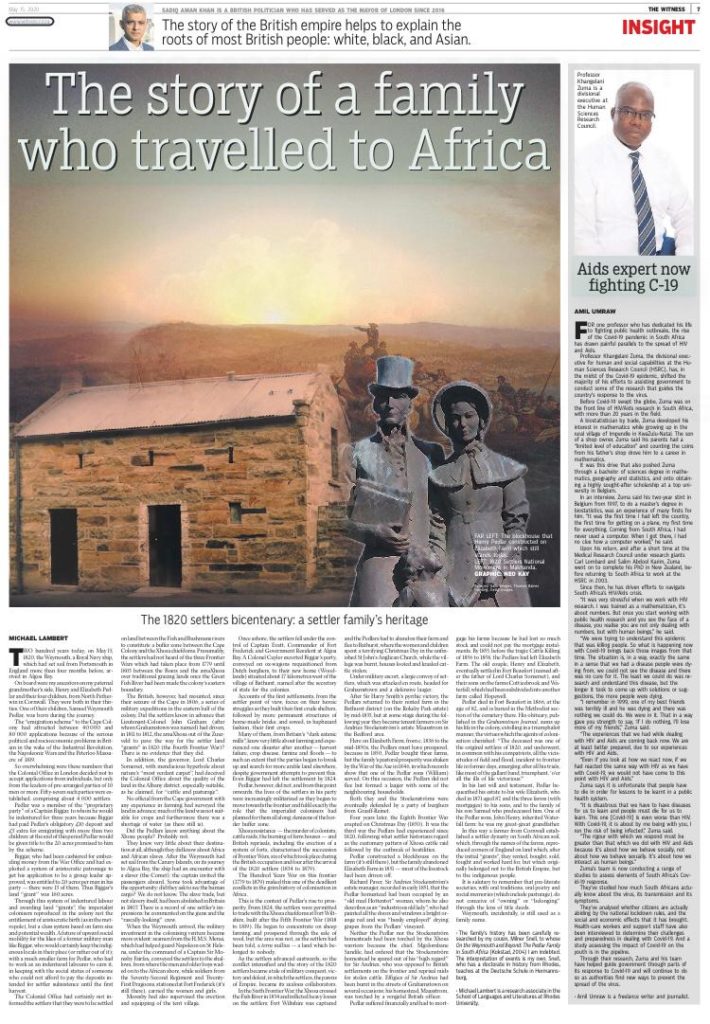