The National Department of Health has developed, and is currently implementing, what it calls the ‘Surge Strategy’ in anticipation of the peak of COVID-19 cases in South Africa.

Speaking in the National Assembly on Wednesday, Health Minister Dr Zweli Mkhize says this will ensure that the department increases its capacity for COVID-19, while at the same time continuing to deliver other health services. During this process, the Department repurposed a total of 40,309 hospital beds for COVID-19 as provinces start to experience a sudden increase in their number of cases.

Mkhize said such interventions are only possible because of the nationwide lockdown.

“As a country, we did witness the intended benefits of the lockdown. The delay in the spread of infection allowed us to achieve what we could not have achieved as a country, had we continued in the normal course,” he said.

In South Africa’s COVID-19 fight so far, almost two million laboratory tests for COVID-19 have been conducted. By the beginning of this month, 139 quarantine facilities have been activated across the country – constituting a total of 12,532 additional beds.

The Community Screening and Testing (CST) Programme initiated in April has ensured that more than 20 million people have been screened and 302,713 suspected cases have been referred for testing.

“Screenings in identified hotspot areas and emerging hotspots show that the CST programme has assisted in active case finding amongst high transmission communities which has allowed our provinces to divert resources to the district or sub-district level,” Mkhize said.

Mkhize said several interventions have been put in place to address this.

Guidelines to support all health workers across the continuum of care were developed; a targeted training programme has been designed and implemented to enhance the understanding of the pandemic and facilitate application of these guidelines; and in-service training of all health care workers was conducted to ensure that workers can cope with the management of the pandemic.

The Solidarity Fund was able to commit a total R815-million towards procurement of urgently needed PPE’s for South Africa’s healthcare workers. The country also received generous donations of PPE from several countries, foundations, businesses and churches.

Since the last release of scientific model results in May 2020, the National COVID Epi Model has also been updated to model COVID-19 at a district level, making use of South African hospitalisation data, updated estimates of the reproductive number, and a shift in testing priorities.

Model projections indicate that while the epidemic is predicted to peak nationally at a similar time to the previously projected optimistic curve (that is mid-August), it does so at a lower level. This means that fewer people were infected in May and June than was previously predicted even under the optimistic scenario.

While the model projects a lower need for hospital (non-ICU) and ICU beds at a national level, bed capacity is still expected to be breached or overwhelmed in all provinces.

The Department of Health is working with the Department of Trade and Industry and Competition to manufacture Continuous Positive Air Pressure (CPAP) devices. These are being procured on top of the 1000 ventilators donated by the US government.

The Department of Health has built several field hospitals, which will primarily be used for admission of mild cases. The Western Cape has completed constructing three field hospitals which are functional. Gauteng (NASREC), KwaZulu-Natal (Pietermaritzburg) and Eastern Cape (Port Elizabeth, VW) each have one field hospital which are also operational.

“The Department is working with the National Treasury and partners to conduct an audit of the oxygen reticulation infrastructure in all our hospitals. These audits are being conducted with a priority focus on the Eastern Cape, KwaZulu-Natal and Gauteng,” Mkhize said. 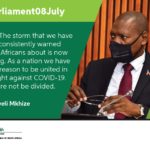 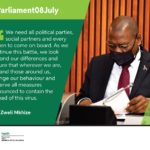 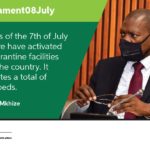