Health Minister Dr Zweli Mkhize has explained the rationale behind some of the new lockdown regulations announced by President Cyril Ramaphosa on Sunday.

Mkhize, who was speaking at a briefing of the Social Cluster on Monday, said decisions to ban the sale and distribution of alcohol, impose a nationwide curfew and allow minibus taxis to operate at full capacity, were all taken after rounds of consultation.

“The numbers are growing every day and hospitals are admitting patients every hour…Many of us have got friends, relatives and family members who are already affected by this pandemic. It is a new, painful reality that we can only curb this viral infection if we as citizens behave. We need everyone to take responsibility and change our behaviour,” Mkhize said.

Mkhize said that while the initial hard lockdown “was very helpful in delaying the arrival of the surge”, it did have its challenges.

“We needed to balance the lives and the livelihoods and get our people to learn how to co-exist with the virus. We also knew the numbers were going to be rising,” he said.

“For our people, the mainstay of transport is taxis which transport very close to 16-million people every day. Therefore, it becomes the one very important aspect of ensuring people can get to their jobs and be back home safe.”

Mkhize said some taxis are now allowed to operate at full capacity – provided measures are put in place.

“Some studies which were done in China indicated that the virus spreads very quickly between people sitting in a confined space for more than 20 minutes. What we also found was the importance of ventilation in reducing the spread of infection. If we were able to allow the movement of the droplets by allowing a draught through a confined environment, it may be helpful,” Mkhize said.

“Windows should be opened and this is sufficient to allow the movement of air so whatever air particles inside are able to move out…No person should be allowed into the taxi without wearing a mask.”

Mkhize explained that the banning of alcohol could alleviate the pressure of alcohol-related trauma cases at hospitals.

“We are concerned about the fact that the consumption of alcohol in the country is pretty high. It’s estimated that 31% of South Africans 15 years and older are current drinkers. Despite the low proportion of South African adults who drink, we are one of the nations that drink the most,” he said.

“Almost six out of ten drinkers over the age of 15 in South Africa are reported to engage in what is called binge drinking…Alcohol-related trauma patients are usually young and fit individuals who would not otherwise have needed to be hospitalised.”

Statistics have shown that during the Level 4 and 5 hard lockdowns, when the sale and distribution of alcohol was prohibited, there was a 60% reduction in hospital trauma admissions.

Mkhize said that social activities that result in the spread of the virus mainly take place at night.

“A lot of activities take place outside the workplace when we start to socialise and a lot of accidents take place at night. Some of the activities that have brought us a lot of concern happen after hours when people go out and socialise. That has also been part of the problem,” he said.

“We therefore recommended that there should be a curfew. It is to assist to limit the numbers of people who get infected.

We do expect that the numbers are going to be higher because of the surge but the extent to which the surge is going to grow does depends on how strictly we practice social distancing.” 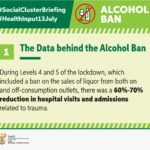 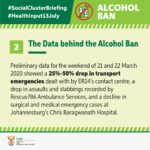 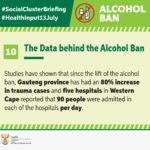 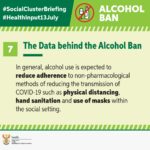 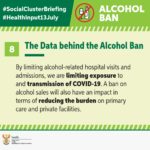 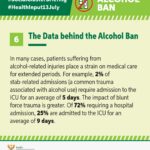 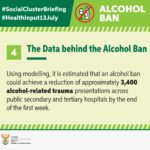 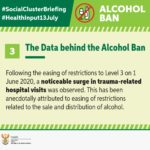