Mkhize concluded his two-day visit to the province with inspections at the Dora Nginza Hospital and Motherwell community health centre. 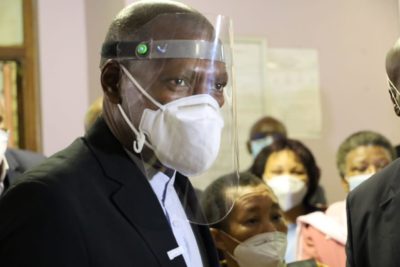 “There’s a whole issue in infrastructure looking at various shortages of equipment. We have gone around the facility: people were talking about the need for pulse oximeters, mobile x-ray units and cardiac monitors. We have actually pulled the team together to fast track the procurement processes at that level,” Mkhize said.

“The other issue is that of human resources and the shortage of nurses. We have indicated that we have a team of highly dedicated professionals and staff. We want to express our sincere gratitude and appreciation to them for all the work that they have done.

We want to make sure there is enough people who are employed because some of them are off sick because of quarantine and isolation periods. We have said that all the barriers, the bureaucratic delays in the appointment of individual staff, must be removed.”

Mkhize said a team is “sitting this afternoon to look at where there are already applicants to take them in”. He said applicants will be employed through emergency arrangements used in disaster periods.

“It’s important that they must be employed as soon as possible to relieve the pressure. We have set up a meeting this afternoon for all the CEOs to link up to this team so that we can take as many as possible of those people who need employment into the health system,” he said.

“We have also had the opportunity to meet with management and unions. One of the challenges is that hospitals have acting CEOs. We have actually directed that there must be speedily resolution of those who are suspended so that matters are resolved and full time appointments can be made.”

Mkhize said there must be “firm and proper leadership” in all institutions so that there is proper direction.

“We do have enough beds at this moment to deal with most of the pressure points. We have actually agreed that in some areas, patients will be moved to the VW field hospital site so we can deal with challenges we are experiencing at that level,” he said.

“We have an approach which says there will be a diversion of oxygen from industrial to health medical use. We also need an increase in the production of oxygen.”