The department has received media queries following the ENCA interview wherein the NEHAWU spokesperson, Khaya Xaba, accused the Minister of Health of lying and misleading the public and the media in a statement released today saying that they (NEHAWU) were part of the meeting held by the Minister and the National Health Council with Unions representing health workers o 22 August 2020.

We have also been taken aback by this blatant denial by NEHAWU and wish to once again set the record straight. All organized labour representatives (including NEHAWU) representing health workers were sent an invitation to the meeting. All of them confirmed attendance and were indeed part of the meeting. NEHAWU even followed up by asking for login details.

The meeting was productive and the NEHAWU representative participated robustly and constructively in the meeting, and this is appreciated by the Department. We must also clarify that we do not in any way assert that engagements with the unions were “rosy”. However, there was a clear way forward that the National Department of Health and Provinces committed to. This leaves us with a task of ensuring that these undertakings are fulfilled and there is constant engagement with the Unions, including through the occupational health and safety committees.

We must never lose sight that this is ultimately for the protection and safety of health workers, which is a commitment the Minister and the whole government has consistently made throughout this pandemic.

It must also be clear that these engagements and the work that is being jointly done does not in any way hinder a legal right of any union to hold a protected protest against an employer as recognized in our labour laws. The Department and the Minister will certainly not interfere with this.

Having said that, the Department of Health’s commitment to engage with the health workers U nions and address issues raised remains. On this unfortunate and incorrect statement by NEHAWU this evening, the Department can only assume that the right hand may have missed what the left hand was doing in so far as this participation in the meeting of 22 August 2020 is concerned.

We attach the attendance register and confirmation of attendance from NEHAWU.

Regarding the request for the minutes of the meeting, for purposes of respecting process and confidentiality, we will not release the minutes to the media unless and until they are approved and this is agreed on by the meeting participants.

We hope this clarifies the position. 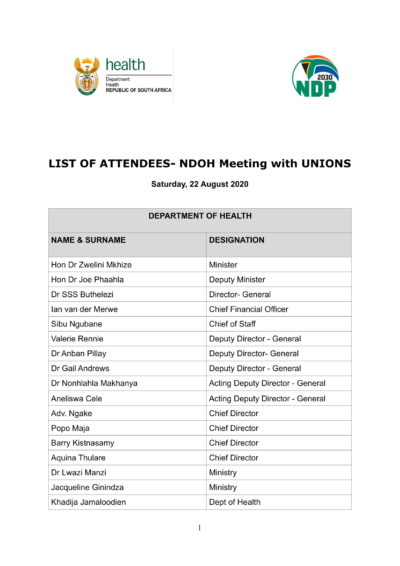 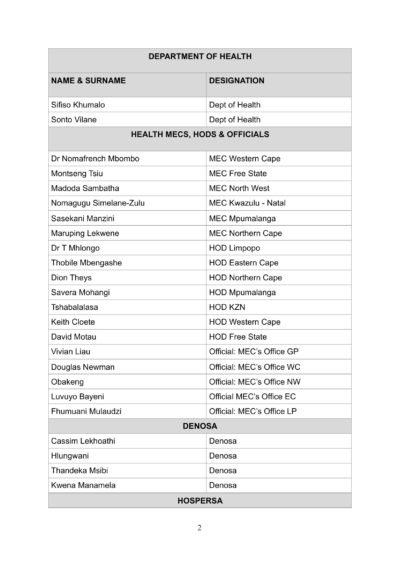 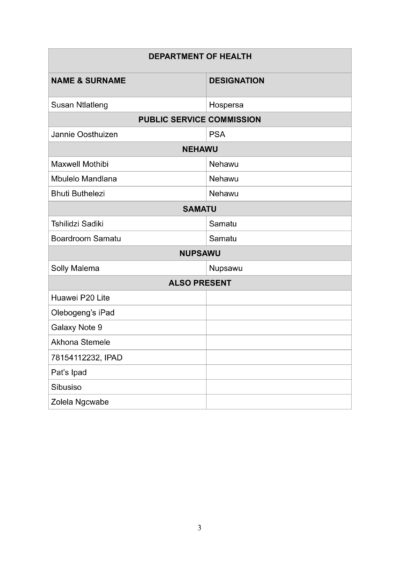