Professor Barry Schoub was left little choice but to study medicine. It is in his blood

Professor Barry Schoub was left little choice but to study medicine. It is in his blood

Professor Barry Schoub was left with little choice but to study medicine. It is in his blood. His father was a doctor, so too his brother and half-sister. When it was time to choose his path, he followed suit.

“My father was a refugee who was fleeing Nazi persecution in Europe, and his path to medicine was one under immense strife and trying circumstances and he made up our minds. It made choosing a life path easier because in the eyes of my father, we really didn’t have a choice,” jokes the 75-year-old whose career spans five decades.

Born in Johannesburg, Schoub studied medicine at Wits University. “The scientific aspects of medicine attracted me more than the human side. I don’t like patients and I never have. I went straight from medical school into a laboratory,” he said, casting his mind back. In 1978, at the age of 33, he became the first Professor of Virology at the newly-formed Wits Virology Department. Schoub helped found the National Institute for Communicable Diseases, as well as the National Advisory Group for Immunisation. 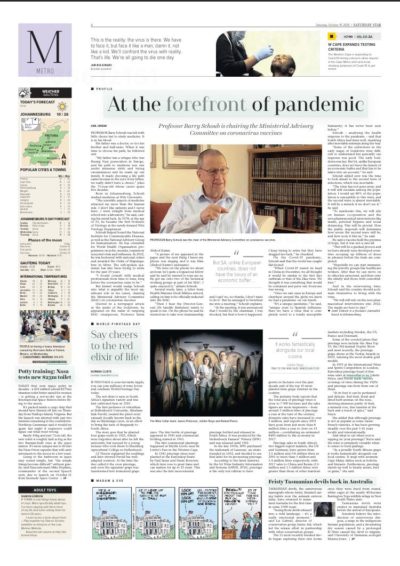 He has consulted for World Health Organization programmes on polio, measles, respiratory syncytial virus and influenza. In 2012, he was bestowed with national orders and awarded the Order of Mapungubwe in Silver. The soft-spoken academic has also been trying to retire for the past 10 years.

“I would consult with medical professionals from time to time, long before the coronavirus came to be.” But kismet would nudge Schoub into what is arguably the most significant role in his career, chairing the Ministerial Advisory Committee (MAC) on coronavirus vaccines.

Quoted in a newspaper article in the midst of the lockdown, he appeared on the radar of outgoing MAC chairperson, Professor Salim Abdool Karim.

“A picture of me appeared in the paper and the next thing I knew my phone was ringing and it was Slim (Abdool Karim’s nickname).

“We were on the phone for about an hour, he’s quite a loquacious fellow and he said he wanted to rope me in. He got me onto two of the technical working groups as part of his MAC. I quite enjoyed it,” admits Schoub.

Several weeks later, a letter from Health Minister Zweli Mkhize arrived, calling on him to be officially inducted into the MAC.

“Then I hear the Director-General (Dr Sandile Buthelezi) wants to speak to me. On the phone he said he wanted me to take over chairmanship and I said ‘no, no thanks, I don’t want to do it’. But he managed to browbeat me into a meeting,” Schoub explains.

“At the meeting, it was announced that I would be the chairman. I was shocked, but that is how it happened. I keep trying to retire but they have dragged me back,” he chuckled.

On the Covid-19 pandemic, Schoub said that the world was caught flat-footed.

“When Covid-19 reared its head in China in December, we all thought it would be similar to the first Sars outbreak or that of the Zika virus. We thought it was something that would be contained and peter out. Everyone was wrong.

“Once we saw cases in Europe and elsewhere around the globe we knew we had a pandemic on our hands. “It’s a unique pandemic,” he said, “unique even to Spanish influenza. Here we have a virus that is completely novel to a totally susceptible humanity; it has never been seen before.”

Schoub – analysing the health response to the pandemic – said that South Africa had done well, steadying after inevitable missteps along the way.

“Some of the restrictions in the early stages of lockdown were difficult to understand but generally our response was good. The early lockdown was key. But SA, unlike European countries, does not have the luxury of an economic buffer and that has to be taken into an account,” he said. Schoub added now was the time to look ahead to the second wave of infections, which was inevitable.

“The virus has not gone away, and it will still circulate among the population. I would say 80% of the population is susceptible to this virus, and the second wave is almost inevitable. It will be a miracle if we don’t see it,” he said. 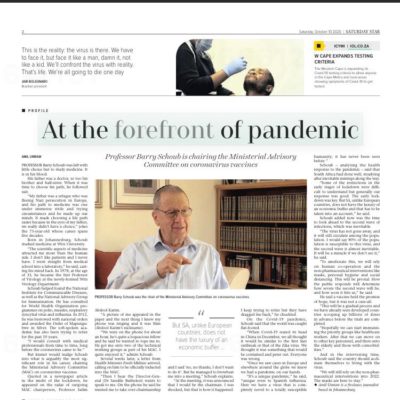 “To ameliorate this, we will rely on human co-operation and the non-pharmaceutical interventions like masks, personal hygiene and social distancing. This will be pivotal. How the public responds will determine how severe the second wave will be, and how soon it hits us,” he said.

He said a vaccine held the promise of hope, but it was not a cure-all. “This will be a gradual process and we have already seen developed countries scooping up billions of doses in advance before the trials are completed.

“Hopefully we can start immunising the priority groups like healthcare workers. After that we can move onto other key personnel, and then onto the elderly and those with comorbidities.”

And in the intervening time, Schoub said the country should acclimate themselves to living with the virus.

“We will still rely on the non-pharmaceutical interventions into 2022. The masks are here to stay.”

Amil Umraw is a freelance journalist based in Johannesburg.

this was originally published at: https://www.iol.co.za/saturday-star/news/professor-barry-schoub-was-left-little-choice-but-to-study-medicine-it-is-in-his-blood–78e17e2e-5654-44eb-a653-077394f1b5c1