“You are the unsung heroes of our struggle against an unseen enemy. You have not flinched, you have made sure that humanity is saved.” 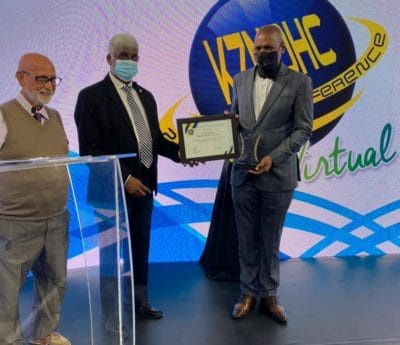 That is how Health Minister Dr Zweli Mkhize described South Africa’s healthcare workers in their fight against COVID-19.

Mkhize was presented with an award by the KwaZulu-Natal Doctors Healthcare Coalition in Durban on Saturday – an award which he dedicated to all South Africa’s healthcare workers.

“It is a very special occasion and a solemn one for us to stand here and pay tribute to the healthcare workers of SA, of the African continent and the world. The world has seen an unprecedented health emergency, a crisis caused by COVID-9 arising from China, spreading from country to country until 62 million have been tested positive,” Mkhize said.

“As we look back, we can all attest to the fact that is one of the most serious tragedies that has befallen our globe in recent history

As we come to SA, the pattern, though different, has taken a similar approach wherein a large number of our people at this point, almost 780,000, have tested positive and in the process, we have lost over 20,000 of our compatriots. Throughout all of this, it has been very clear that COVID-19 has sewed destruction and devastation in every aspect of our lives.”

He said the virus has caused untold harm.

“It has destroyed the largest economies…it has disrupted nations, causing starvation with unemployment, with loss of income and food security. It has caused untold harm which is measurable on the day to day livelihoods of our people,” he said.

Mkhize used the platform to thank healthcare workers and pay tribute to those who lost their lives fighting COVID-19.

“We have seen them as health workers holding each other, comforting each other and crying sometimes when they lose one of their colleagues…your hard work has not gone unnoticed. We want you to know SA is grateful for you, the African continent is grateful to you and the humanity as a whole is grateful to you. You are the unsung heroes of our struggle against an unseen enemy. You have not flinched, you have made sure that humanity is saved.”