The Acting Minister of Health, Mmamoloko Kubayi and Deputy Minister, Dr Joe Phaahla together with a panel of experts, will convene a media briefing on the progress of government efforts in the fight against COVID-19, including an update on the national vaccination rollout programme.

The virtual media briefing will take place as follows:

Media Participation: Journalists may view the briefing via live streaming on South African Government social media channels on the links below:

Issued by the GCIS on behalf of the Department of Health

Good morning to everyone who has joined us for this press briefing.
• The COVID-19 situation in our country remains of great concern as the numbers continue to increase at a very rapid rate.
• In the last 24 hours, there are 21 584 new cases, which is higher than the average number of new cases per day over the 7 preceding days measured at 16 916 cases.
• The positivity testing rate has also increased from 27.6% the previous day to28.4%.
• Gauteng continues to the epicentre of new infections with the number of new cases having risen to 12 806 which represents 60% of the total newinfections.
• We remain very worried about the rise in the hospitalisations which is putting a lot of strain in the health facilities in Gauteng.
• The private health hospitals are currently operating at more 100% capacity and the public health hospital are edging closer to full capacity.
• We are joined in this briefing by Dr Ntsakisi Maluleke who will present to the public the situation in Gauteng, in terms of hospitalisations and how the facilities are coping with the immense pressure that has been imposed by the severity of the pandemic situation .
• The trends are clearly showing that other provinces which are currently lagging are going to experience the trend we are seeing in Gauteng, most notably in the Western and the Eastern Cape.
• Nationally the numbers have surpassed the first wave peak and we are likely to surpass the second wave peak.
• During the week we briefed the nation about the emergence of a new variant in the country.
• This new variant is called that Delta variant. This is the third variant in our country having experienced the Alpha variant in the first wave, the Beta variant in the second wave and now the Delta variant which is dominating the third wave.
• First sampled in India in October 2020 and it has now been detected in 85 countries, including several in Africa, and rapidly becoming dominant in many countries.

The team of scientists led by Professor Oliviera provided details about this new variant and they are saying that:
• There is now good evidence that Delta is more transmissible than previously circulating viruses and other variants of concern.
• The Delta variant is quickly becoming the dominant variant in the country replacing both the Alpha and the Beta variants.
• However, it is important to just remind that public the Beta variant is still prevalent and spreading.
• Another important characteristic of the Delta variant is the fact whereas with those who were previously infected Beta were immune from reinfection by
both the Alpha and Beta variant, it is not the case with the Delta variant
• This means that those who have had COVID-19 are also at a risk of reinfection by the Delta variant

Vaccination
• Over 120 000 people were vaccinated in the last 24 hours. KwaZulu-Natal led the pack, followed by Gauteng, Eastern Cape, and Western Cape .
• The vaccination of educators is progressing well and we have so far vaccinated just over 300 000 educators. We had more educators registering in KwaZuluNatal and followed by Gauteng.
• Yesterday we opened for persons aged 50 and above to start registering and we so far have 354 504 people in the system. This group will start vaccinating on the 15th of July.
• In parallel to this process, we are also finalising details for the commencement of vaccination of other frontline sectors such as the police, defence, the security cluster and we will provide more details about the timelines soon.
• In terms of vaccine delivery, we indicated previous that we are expecting more vaccines to come: Pfizer has delivered nearly 4.5 million doses as promised in Quarter 2. They committed just over 15.5 million doses in Quarter three, of which we are expecting nearly 2.1 million doses in July. Johnson and Johnson have so far delivered 500 000 early access doses used for Sisonke, 300 000
market doses two weeks ago and 1.2 million doses landed last week. These doses all need to be used by 11 August. We are awaiting confirmation for delivery of 500 000 doses (these expire later than the previous doses mentioned) and this then makes up the 2 million to replace those that were lost to the contamination incident.
We make a clarion call to all those who qualify to register and vaccinate.
• We have noted the concerns that have been raised about the efficacy of the vaccines with regards to the Delta variant.
• We are joined today by Professor Glenda Gray who is the CEO of the South African Medical Research Council (SAMRC).
• Professor Grey will present to the public the findings about J&J vaccines.

• We are also joined by Professor Penny Moore who is the South African Research Chair of Virus-Host Dynamics and Reader/Associate Professor at the National Institute for Communicable Diseases (NICD) and the University of the Witwatersrand.
• Professor Moore will speak about the question of “What do laboratory studies tell us about vaccines in use in South Africa?”.
• Let me take this opportunity to thank our scientists who continue to do this world class scientific findings that are helping to fight the pandemic
• Let me also thank healthcare workers doctors, Nurses and all other supporting stuff in health care centres for continuing to be in the forefront of the fight against the COVID-19 pandemic.
• My colleagues at NCCC including the President and the Deputy President, thank you for the support.
• Again, let me appeal to all South Africans to work with us in the fight against the pandemic and thank all those who have been complying with the regulations that are aimed at containing the spread of the virus. 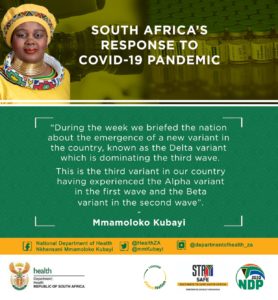 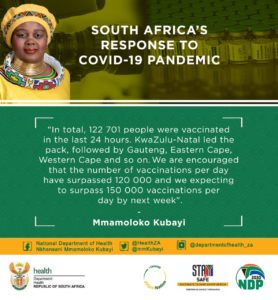 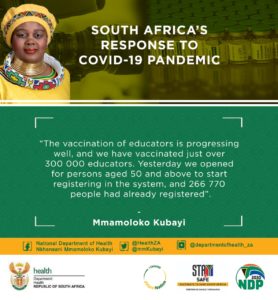 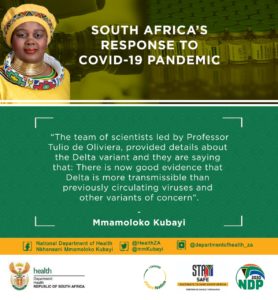